There is a lack of clear historical sources which would enable us to understand the origins and meaning of the Egetmann pageant. Not surprisingly, there is a strong temptation to give a magical interpretation to the pageant, but this would be incorrect.

Most commentators see in the Egetmann pageant and its characters references to ancient fertility rites and pre-Christian pagan sacrifices.

Nowadays the tendency is not to date the origins of the pageant to such ancient times but rather to see it as a Shrovetide explosion of joy before Ash Wednesday and the fasting period of Lent. Similar pageants are held all over the German-speaking world.

Without getting too bogged down about different interpretations and dates, what we can say for sure is that the Egetmann pageant, with its origins in the medieval tradition of Shrove Tuesday (Mardi
Gras) symbolises the struggle between light and darkness, between good and evil, and the advent of spring and fertility. 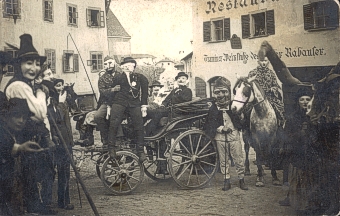 One of the earliest photos of the Traminer Egetmann parade

Here we see one of the oldest photos of Traminer Egetmann pageant, taken around 1907. It shows the parade participants wearing wooden masks, also called larvae. It is interesting that there is none of them preserved.

Today wooden masks are quite forgotten in Tramin. So this photo shows a real rarity. 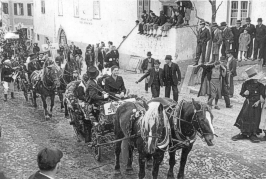 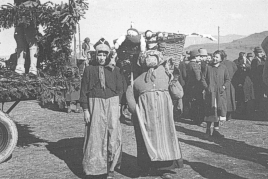 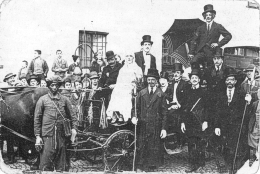 Documented records go back to 1591, showing that this tradition existed in many places in the Lower Etsch Valley of South Tyrol. Ignaz V. Zingerle records and describes the tradition in Tramin and Neumarkt in 1871. The first complete description of the pageant and the protocol in its present form dates back to 1876. 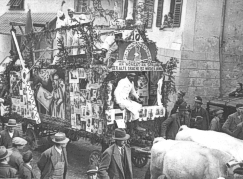 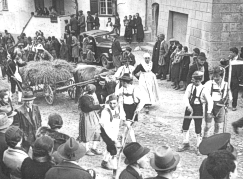 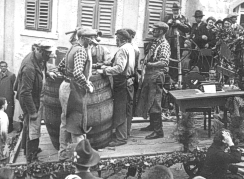 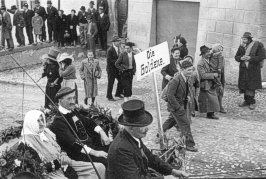 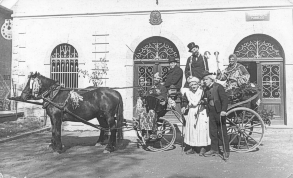 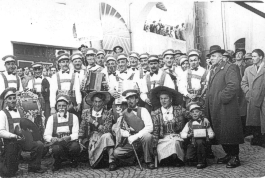 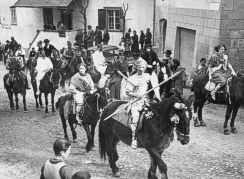 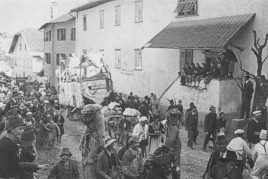 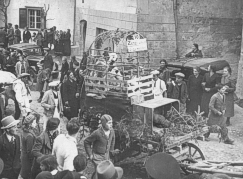 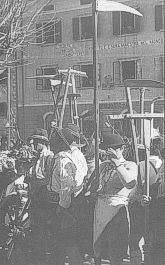 Peasants in the village square (1941)

The image shows the "old Germanic spring custom" in front of the backdrop of fascist slogans. The "Doctor House" on the main square - in this years used as “Dopolavoro” - proclaimed next to the famous anti-democratic motto "credere - obbedire - combattere" (belief - obey – fight) also: "Roma fu è semper e sarà maestra nel mondo". (Rome was and will ever be the mistress of the world.) 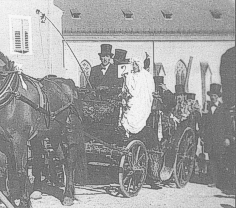 Not the main character, " Egetmann Hansl" himself, but his bride is taken well in this picture. Instead of a white wedding dress it seems that she wears a nightgown with a flouncy bonnet. 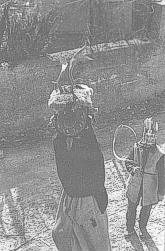 While the other "Schnappviecher" allegedly wore horns, Wolfram noticed in 1941 this single one, which was adorned with a deer head. In comparison to today, bite and "torso" point to an early phase of evolution.

The "Crone Mill", which, since its inclusion in the parade was always one of the most spectacular parade floats, in 1941 was especially elaborated. Their function is explained on the labels on the front: "One moment, one jump, / the old dragon is young again" and "You want to go in, it is right, / and otherwise you must". In the back on the right sight is visible the shrine of St. John of Nepomuk at the creek of the Höllental (Tramin).

What is the relevance today of such an irrational and magical tradition?

Firstly, it’s a tradition which is being kept alive, but one which is not fossilised, but rather it is kept alive using a lot of imagination and a spirit of playfulness so that today’s pageant still maintains its vitality while continuing to include ancient rites.

Secondly, and equally importantly, the Egetmann Pageant is a social event for the whole village of Tramin. Paradoxical as it may seem, the pageant does not need spectators: it exists for the actors themselves, to have fun and to let their hair down. In this way it differs from the rather sterile carnival parades in some bigger cities (Cologne, Mainz).

Spectators are naturally welcome, but this pageant remains  essentially a magical celebration for the whole population of the village of Tramin.