The Egetmann Pageant in Tramin

The Egetmann Shrovetide Pageant, with its origins stretching back into the mists of time, is one of the most striking carnival parades anywhere in the Alps.

Description of the parade and the main characters

The parade is opened by the trumpeter, followed by farmers on horseback and their labourers and by farmers brandishing long whips (‘Ausschnöller’). These are then followed by the stewards whose job it is to keep the route of the pageant clean and free of obstruction. Behind them come all the rest of the farmers with their ancient implements for working the land, accompanying a cart containing seed-corn (symbolically depicted by wood-shavings, hay and dust). In turn these are followed by the central character, the Egetmannhansl, a dummy in a black jacket, top hat and white gloves travelling in an open carriage, accompanied by his servant. In front, next to the driver sits the bride, transforming the parade into a marriage procession. As in Shakespeare’s time, female characters can only be played by men dressed up as women!

It is strictly forbidden for the bride to quench her thirst by drinking wine; instead she is allowed to drink as much schnapps as she wants!

Behind the nuptial carriage come the councillors, the local dignitaries, each with a symbolic object: the Book of Protocol, a ladder, an umbrella, and two candlesticks (each composed of a wooden stick with a corn-cob as a candle). This group of dignitaries, dressed in black with top hats, is preceded by the town-crier. 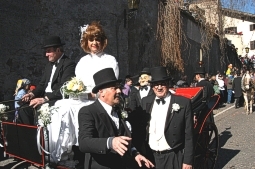 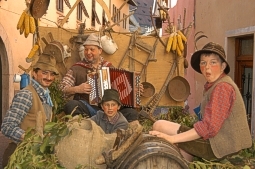 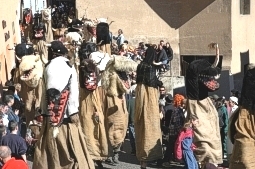 The parade passes through the streets of Tramin, stopping at every fountain, where the ladder is erected and the councillor with the umbrella climbs up and opens it. The town-crier climbs half-way up the ladder and reads the Egetmann’s offer of marriage from the Protocol. The other two councillors remain at either side of the ladder with their candlesticks. Each sentence of the Protocol is cheered by the people present.

The parade is also made up of a procession of floats symbolising silver and golden wedding anniversaries, and many other figures:

The ‘Wild Man’, a frightening demon whose origins are lost in the mists of time. He is one of the few characters to wear a mask: in this case one of rabbit-skin with two holes for the eyes, making him look terrifying, as does also his clothing made up of rags covered in ivy leaves. It is thought that originally all characters had a mask but that many were lost over the centuries.
The hunter accompanies the ‘Wild Man’ from fountain to fountain in the parade and at the end kills him, symbolically representing the end of winter (the ‘Wild Man’) and the ushering in of spring (the hunter). 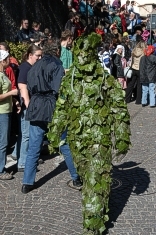 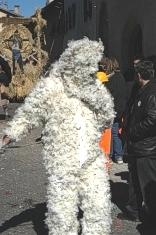 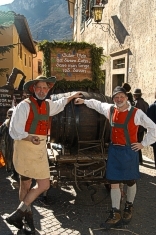 There is also another figure also connected to the pagan symbolism of spring and who drives away the winter: the ‘Schnappvieh’ or ‘Wudele’, a sort of crocodile without ears but with horns, and covered in skins. His lower jaw opens and closes with a loud noise, always on the lookout for prey. This crocodile-like creature is two metres tall, and there is usually a whole group of them. They are always followed by the butcher who, at each of the stops at the many fountains captures one of them and kills it, another ritual of spring banishing the bad spirits of winter. 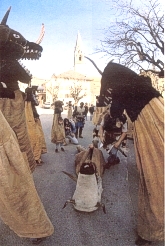 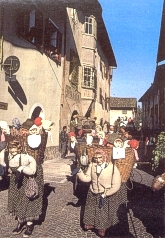 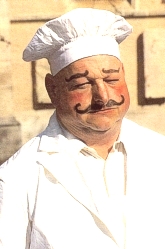 The ‘Burgl’ and ‘Burgltreiber’ are two mysterious figures central to the parade. They are supposed to be a man and a woman: they have blackened faces and are dressed in rags. The woman (‘Burgl’) her legs clad with the husks of corn-cobs. She carries a basket with a doll (her child) on her back and is covered in chains and bells. Throughout the parade she tries to escape from the male figure (the ‘Burgltreiber’) who wields a big stick with which to beat her. She tries unsuccessfully to escape from his clutches by running to the doorways of the various houses, where she tries to draw attention to herself by rattling her chains and bells noisily. but the man always reaches her and, equally noisily, drags her away. Once again the symbolism is quite clear: in this rite of spring the bad winter spirits are banished from each house. We also find the same concept with the figure of the two washerwomen who clean their dirty winter washing at each of the fountains. 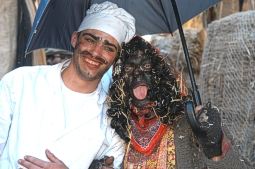 a miller and a "Alt-Weibele" 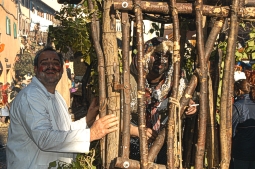 a miller and " Zenzi" 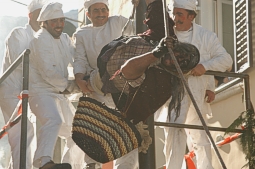 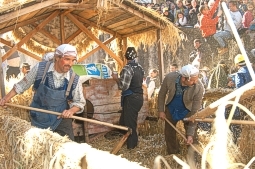 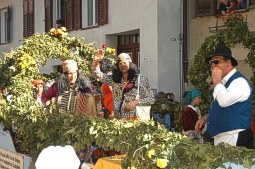 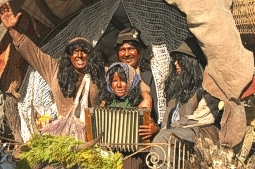 These two women, one with a basket on her back, the other with a tub, are typical characters whose origins have been lost in time: one carries her husband and her children in the basket, while protruding from the other woman’s tub we can see two male legs with boots on. Similarly, we no longer know the symbolism of the fisherman (perhaps it dates back to the beginnings of Christianity in these parts), of the doctor on the donkey, of the tailor who sews together the jackets of the women he meets, of the cooper, the wealthy and poor gypsies, etc. 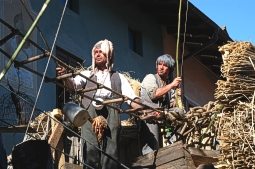 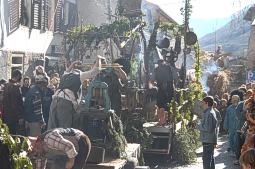 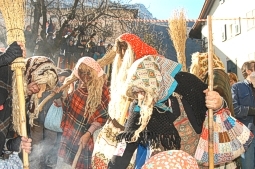 The traditional part of the parade concludes with the old women’s mill (borrowed from a pageant in Sterzing, and which has subsequently become a permanent feature of this parade), which ‘mills’ the old women, turning them into young and beautiful ones. This is accompanied by the cart of the virgins and by Zenzi, who doesn’t want to become young. 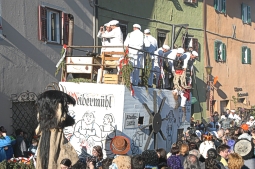 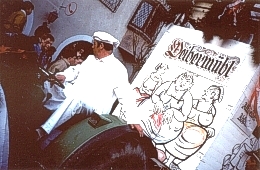 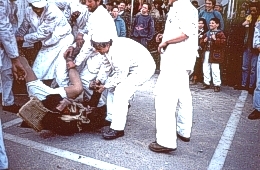 Today’s pageant more or less follows the order set out above, which itself dates from 1965. In accordance with tradition the pageant is repeated every second year, always in odd-numbered years. 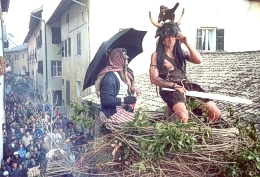 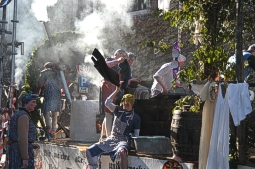 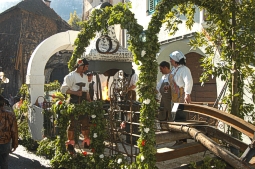